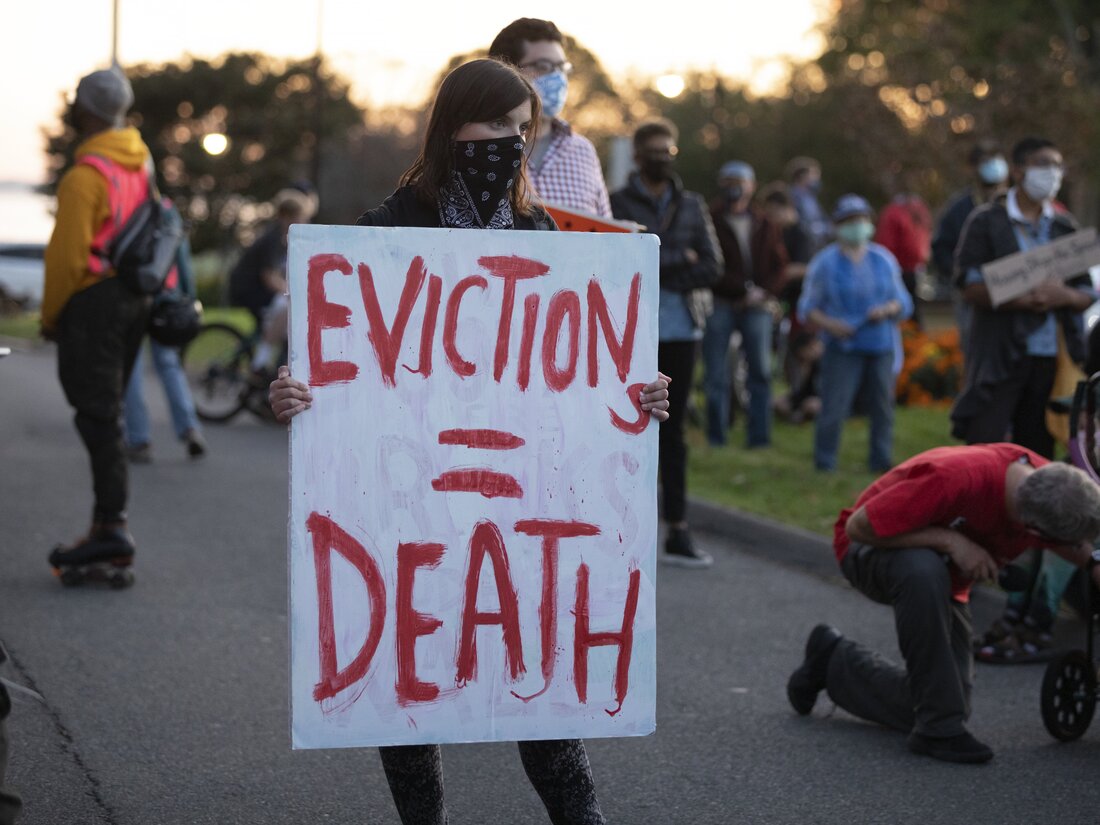 Housing activists gather in Swampscott, Mass., on Oct. 14 to call on the state’s governor to support more robust protections against evictions and foreclosures during the pandemic. 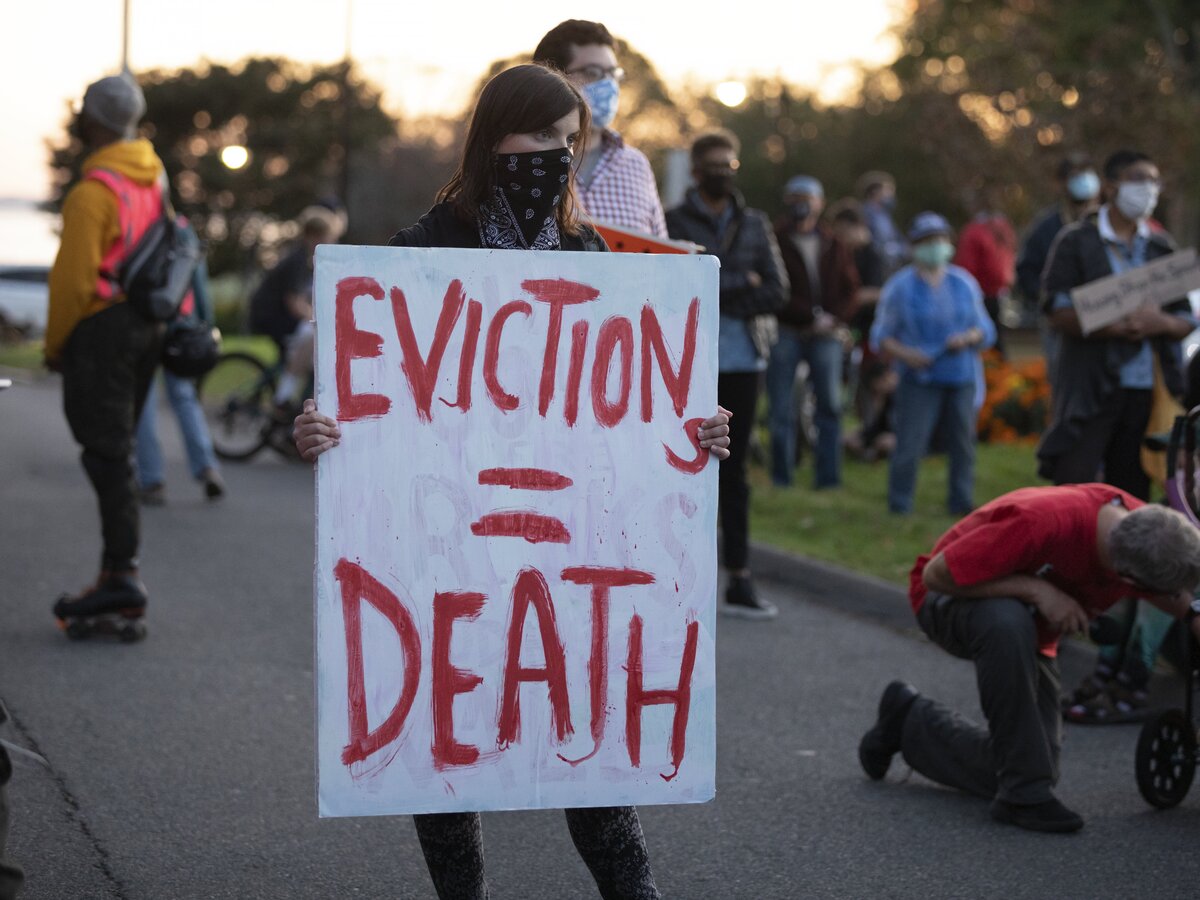 Housing activists gather in Swampscott, Mass., on Oct. 14 to call on the state’s governor to support more robust protections against evictions and foreclosures during the pandemic.

With their savings running out, many Americans are being forced to use credit cards to pay for bills they can’t afford — even their rent. Housing experts and economists say this is a blinking-red warning light that without more relief from Congress, the economy is headed for even more serious trouble.

There’s been as much as a 70% percent increase from last year in people paying rent on a credit card, according to an analysis the Federal Reserve Bank of Philadelphia.

“If you’re putting your rent payments on to a credit card, that shows you’re really at risk of eviction,” says Shamus Roller, the executive director of the nonprofit National Housing Law Project. “That means you’ve run out of savings, you’ve probably run out of calls to family members to get them to loan you money.”

Marine Madesclaire could be faced with the choice of paying her rent on credit too.

Before the pandemic hit, she felt like she was hitting her stride. The 29-year-old Los Angeles actor was doing lots of auditions and managing to land at least some quick appearances in Hollywood films.

To pay the bills she had a gig doing modeling work at Las Vegas trade shows. “You go to the conventions and you stand and look pretty next to, insert product,” she says. “And it paid very, very well. I had been traveling.” 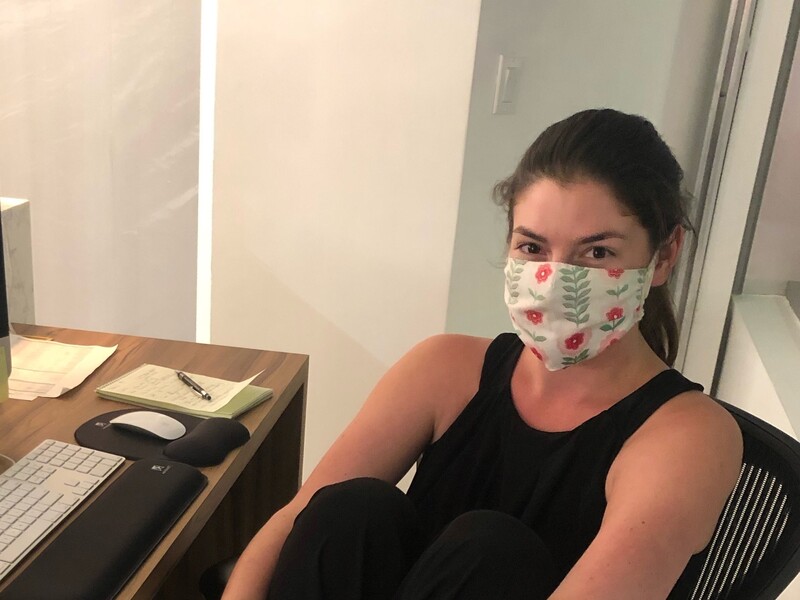 Marine Madesclaire at the low-wage reception job she’s taken to try to survive financially. She’s faced long delays in getting unemployment benefits and is sinking deeper in credit card debt. 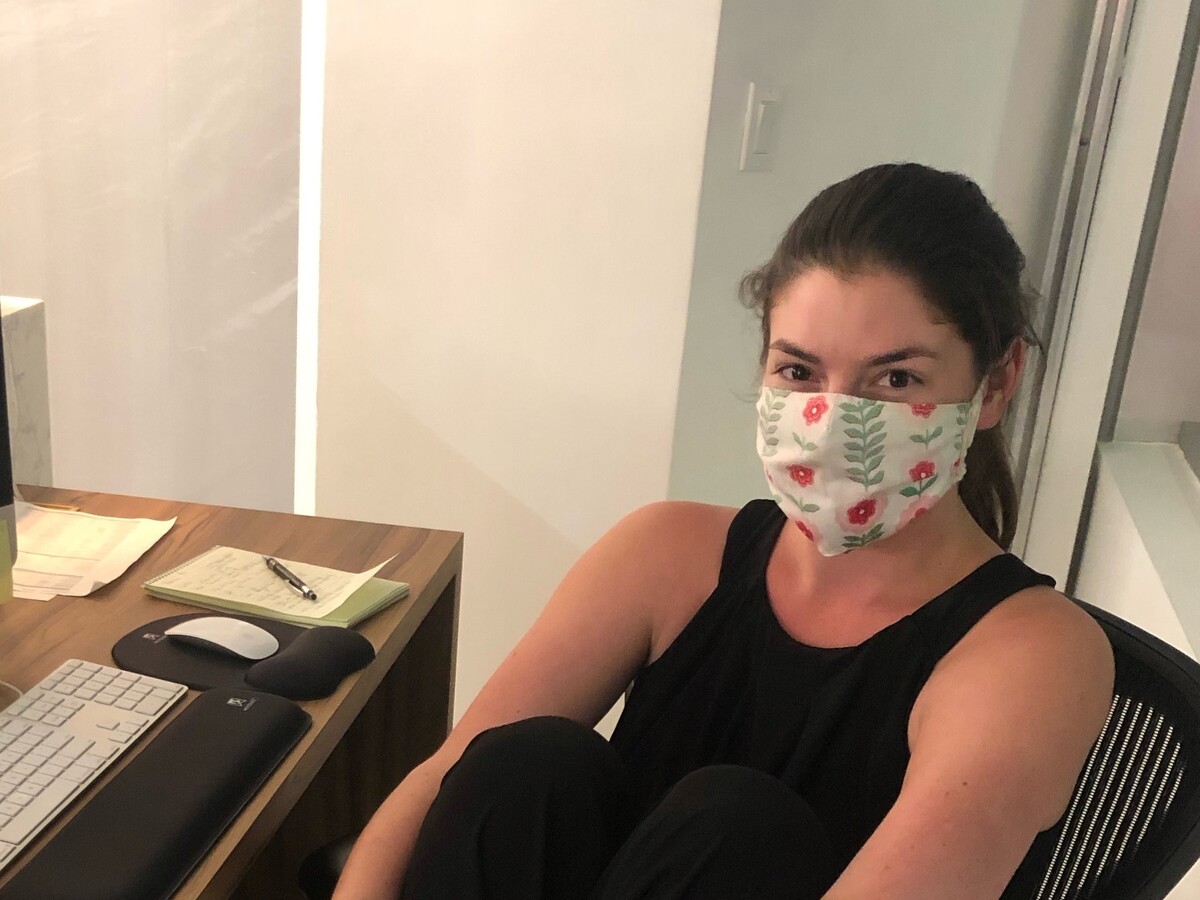 Marine Madesclaire at the low-wage reception job she’s taken to try to survive financially. She’s faced long delays in getting unemployment benefits and is sinking deeper in credit card debt.

But all that stopped in March. Since then, Madesclaire has been among millions of unlucky people who’ve faced long delays getting unemployment benefits. It appears she should qualify. But it’s been more than six months and she still hasn’t received any unemployment money.

“It’s been so long that I don’t cry about it anymore,” she says. “I used to, like, have full-blown meltdowns about it.”

She depleted her savings just to eat and pay bills. She’s run up more than $10,000 in credit card debt.

Madesclaire has asked her card issuer Chase for help. But she says except for waiving some late fees, the bank hasn’t done much to help her. She says the 16% interest is sinking her even deeper in debt.

“They’re charging me interest and late fees,” she says. “And up until like a week ago, they also were calling me like five times a day until I told them to please stop.”

Chase said in a statement to NPR that it has enrolled many customer accounts in “payment assistance” plans. The bank says it doesn’t charge them late fees but it does keep charging interest.

Madesclaire was finally able to find a low-wage job at a computer repair store. But while that just barely covers her monthly bills, she’s still four months behind on her rent.

A state eviction moratorium in California will protect her until the end of January, or she says she would have paid her rent on a credit card too.

“If the choice is debt or homelessness,” she says, “I’m going to go in as much debt as I can.”

Some people just pay that way for convenience. But for many others it’s an act of desperation.

Roller of the National Housing Law Project notes that there’s a federal order from the Centers for Disease Control and Prevention aimed at preventing evictions. But it’s not an outright ban and many people don’t know the order exists or how it can protect them. So he says it’s not working very well. There have already been thousands of evictions in Houston, Memphis, Richmond, Va., Columbus, Ohio, and other areas, Roller says.

It could also be just the tip of the iceberg. And it’s not just housing rights groups that are worried.

Mark Zandi, chief economist of Moody’s Analytics, estimates about 10 million Americans owe back rent. And without another robust relief bill from Congress, he expects to see “mass eviction” starting early next year.

“Just think about that for a second,” he says. “This is all going to be happening in the dead of winter, in the middle of a raging pandemic. I mean, I can’t even construct a darker scenario.”

Zandi says even if they don’t lose their housing, millions of other Americans will fall deeper into debt. And he says so many people continuing to suffer financially will hurt the whole economy.

“I think odds are very high that we’re going to go back into recession,” he says, “if lawmakers can’t get it together early next year and pass a fiscal rescue package.”

So Zandi says, “it’s absolutely critical that lawmakers step up.”

As part of the federal aid, he and Roller would both like to see an effective nationwide eviction moratorium, combined with money to pay landlords the rent they are owed to keep them from going under too.